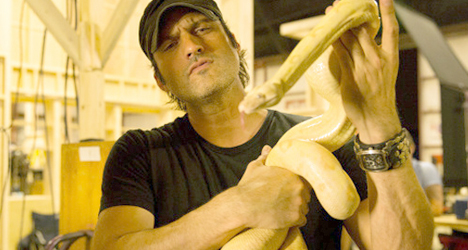 “If you have a new network, you have to have content.”

During the SXSW Film Festival, I sat down with Austin-based filmmaker Robert Rodriguez (“Sin City”) to talk about his new TV network El Rey and its first original program “From Dusk Till Dawn.” The series is based from Rodriguez’s 1996 thriller of the same name, which starred George Clooney and Quentin Tarantino as criminal brothers […]

“Equal parts satire and parody, it piles on the craziness with reckless abandon from the get-go.”

“Entertaining mayhem and political satire…with the aesthetics of a hardcore vigilante film.”

“Focuses more on special effects and overuses slapstick to reach the demographic.”

“If someone had tried to shoot this movie like a regular movie that would have robbed the audience of that visual experience.”