Actor Aaron Eckhart’s transformation into gothic literary character Frankenstein’s monster (AKA Adam) might be the first official “monster” he’s played on the big screen, but he has portrayed a handful of other debauched characters in his 22-year career. Here is a look at a few other characters that’ll probably make your skin crawl more than his embodiment of Frankenstein’s monster…

Character: Chad
Film: In the Company of Men (1997)
Why he’s a monster: Devoid of any moral capacity, Chad is one of those characters you’d hope even your worst enemy never meets during his or her lifetime. In the film, the first by director Neil LaBute, Chad, a misogynistic business executive, concocts a scheme where he and his coworker end up dating the same a deaf woman and plan to string her along before dumping her simultaneously and breaking her heart. And you thought your ex-boyfriend was a dick.
That’s a fucked up thing to say: “Let’s hurt somebody.”

Character: Del Sizemore
Film: Nurse Betty (2000)
Why he’s a monster: In this other Neil LaBute dark comedy, Eckhart gets to show off his insensitive side again, this time as Del Sizemore, a used car salesman who is having an affair with his secretary unbeknownst to his wife (Renée Zellweger). He’s also selling drugs on the side from his car dealership. This time, however, Eckhart gets what he probably deserves.
That’s a fucked up thing to say: “You know these actors are mainly models, which are mainly faggots. And the rest are assholes.” 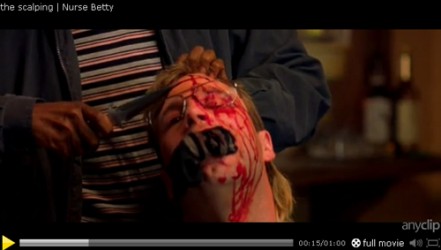 Character: Nick Naylor
Film: Thank You for Smoking (2005)
Why he’s a monster: As a smooth-talking tobacco lobbyist, it’s Nick Naylor’s job to tell everyone it’s safe to light up and offers studies to prove to consumers that smoking cigarettes, in fact, is not hazardous to their health. He also wants more Hollywood studios to advertise cigarettes in their films through product placement.
That’s a fucked up thing to say: “Few people on this planet know what it is to be truly despised. I earn a living fronting an organization that kills 1,200 people a day. We’re talking two jumbo jet plane loads of men, women and children. I mean, there’s Attila, Genghis… and me, Nick Naylor. The face of cigarettes, the Colonel Sanders of nicotine.”

Character: Travis Vuoso
Film: Towelhead (2007)
Why he’s a monster: Eckhart is at his most perverse when he plays Mr. Vuoso, an Army reserve who develops an infatuation with his 13-year-old Lebanese American neighbor and ends up raping her.
That’s a fucked up thing to say: “What the hell do you think you’re doing with that nigger? You’re going to ruin your reputation.”

Character: Two-Face
Film: The Dark Knight (2008)
Why he’s a monster: He may only be the charred DC Comic’s character for a short time before he falls to his death at the hands of Batman in the popular sequel, but Eckhart is just as warped as Heath Ledger’s Joker when he gets a coin in his hand. He was a good-hearted politician when he was Harvey Dent, but once the Joker took away everything important to him, there was nothing left but madness.
That’s a fucked up thing to say: “You thought we could be decent men in an indecent time. But you were wrong. The world is cruel, and the only morality in a cruel world is chance. Unbiased. Unprejudiced. Fair.”