There’s a really good chance I’ll get to interview San Antonio’s own Academy Award-nominated actor Jackie Earle Haley for his role as the new Freddy Krueger in the upcoming remake of “A Nightmare on Elm Street.” 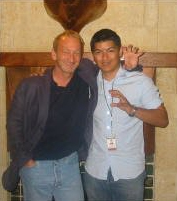 In 2003, I got to interview original Freddy Krueger Robert Englund (see Robert and I to the right) so talking with Jackie should be a lot of fun. The last time I interviewed Jackie was back in 2006 for his Oscar-nominated role in “Little Children.” If you haven’t seen that movie, put it on your Netflix queue. It was No. 3 on my Top Ten list for 2006.

So, anyone have a question they’d like to ask one of the most famous psychopathic serial killer in movie history? Send in your questions and I’ll pick a handful of the best and include them in my interview.

Also, if I end up picking your question, I’ll send you a ticket to the San Antonio pre-screening of the movie (only if CineSnob.net is named as a sponsor). “A Nightmare on Elm Street” opens in theaters April 30.